In the last 6 months, Citilab has participated in several international actions framed within the European project Future Divercities in which creative and innovative activities have been carried out. The aim of these initiatives is to strengthen the social ties of communities through art, empower citizens in the role of creators, engage the agents of the territory in the participation of artistic activities and put creative technologies at the service of cultural expression.

In January, Citilab became involved in the first artistic, social and urban action of 2017 working together with the German platform Public Art Lab. Laia Sánchez, responsible for Citilab’s Collaboratory and coordinator of European projects, collaborated in the lab ‘Digital Calligraffitti‘ in Berlin. This action aimed to empower refugees as newcomers and make their voices visible through an experience combining art, creative technologies and public spaces in the host city.

During several sessions and workshops, the students were instructed in the art of handwriting and afterwards amplified their artistic and socially engaged messages from the light table by Canadian artist Michael Ang. These digitized creations were shown in the window of the Collegium Hungaricum and on the screens of a subway station in the city of Berlin, using the city’s surfaces as interfaces of expression and social awareness through art.

In the same month, Citilab participated in the launch laboratory for the Future Divercities project in the framework of the ‘Festival Chroniques‘ in Marseille, the event that filled artistic creations and performances in urban spaces throughout the French city. In addition, street festival ‘Les Dimanches de La Canebière’ organized by the City Council of Marseille tested the artistic contents of Future DiverCities.

During this collaboration, Laia Sánchez represented Citilab participating in the work meetings with the project partners and the cultural innovation activities of the creative laboratory. Subsequently, she gave a co-design workshop to share the living lab methodologies of Citilab with the 1D Lab team on the development of the 1D Touch platform and the ‘Divercities‘ mobile application.

A new partnership between Future DiverCities and Public Art Lab was held in Thailand in April, where the ‘Urban Media Art Academy‘ training was developed. This training was addressed to architects, designers and all kinds of creative professionals who wanted to approach the concept of “urban media art”.

This global educational initiative was based on the research and experimentation of innovative urban art making use of creative technologies to convey messages and share knowledge. To bring this discipline to the participants, a network of international collaborators gave lectures, seminars and workshops in the city of Bangkok.

From Citilab, Laia Sánchez unveiled the 3H model (heads, hearts & hands on) and, to apply it, gave a workshop on the identification of users, institutions and agents in the development of a creative work. In addition, she developed a design and prototype activity of urban multimedia art in the public space.

Creativity and Innovation Day, organized by the City Council of Cornellà, launched the challenge to city agents to organize street art activities open to all citizens. The aim of this initiative was to turn the attendees into creators and not mere spectators; everyone was invited to participate in actions focused on visual, scenic and musical arts.

Citilab worked jointly with the Maria Aurèlia Capmany secondary school to turn students into filmmakers and camera technicians, who recorded the musical performances of the day. In addition, Citilab’s television set was also moved to the neighborhood of Gavarra to interview the collaborators and participants of the activities. 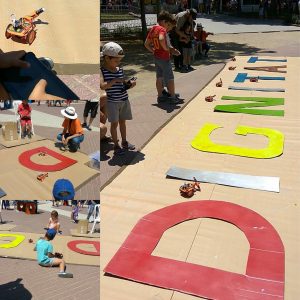 The last event framed within the Future DiverCities project took place at Plaça de Catalunya in Cornellà in June. The ‘Dignity Week‘ was also organized by the City Council of Cornellà, and Citilab participated in an activity during the ‘Committed Saturday‘ with a new creative technology: DiBot, the painter robot.

Programming the DiBot with Snap4Arduino and controlling it through a tablet, participants of the ‘Committed Saturday’ were able to guide the robots to follow the letters of the word ‘dignity’ on a large mural.

The joint work of Future DiverCities and Edutec has featured the DiBot robot in Tecnoestiu, the technology summer activity that is being developed at Citilab from June 26 to July 26, which aims to approach robotics, programming and art to children and youngsters.

In addition, the Citilab’s robot was the resident artist of Future DiverCities’ Instagram (@futuredivercities) in June to be known worldwide. With this same goal of disseminating and publicizing the Citilab’s work, Future Divercities opened a dialogue on Twitter under the hashtag #FDCFocus.

Future Divercities is currently preparing a new European co-design initiative that will bring together artists and local agents and will be held in November in Cornellà, coinciding with the tenth anniversary of Citilab.

Join the new edition of “Inicia’t” course in April

A new edition of "Inicia't"…

Citilab and the non-profit organization…

The second edition of the Jornada Apropa arrives. You can’t miss it!

You are not sure what…