SeniorLab has met this Thursday, February 16th, to offer the presentation of one of the projects that a group of seniorlabers has carried out. The presentation consisted of the projection of the video produced by Neus Sevilla, Núria Anglés, Rosa Garvi, Paco Flor and Consol Badenes on the industrial past of the municipality of Cornellà del Llobregat.

SeniorLab is a project that fosters active aging and enhances the learning of new technologies to include elderly people in digital culture and in the knowledge society. Thus, in order to combat the digital divide, projects that are carried out in autonomous research and work groups are launched.

The project on the industrial past of Cornellà is a small trip in time that reviews the industrialization process of Cornellà and explains the history of the factories and industries that were part of the municipality from the 20s to the 70s. All the video information has been searched for by the five senior authors of the project that have consulted the Digital Map Library, several files extracted from the libraries of Cornellà and the Biblioteca Nacional de Catalunya, as well as a long list of websites. 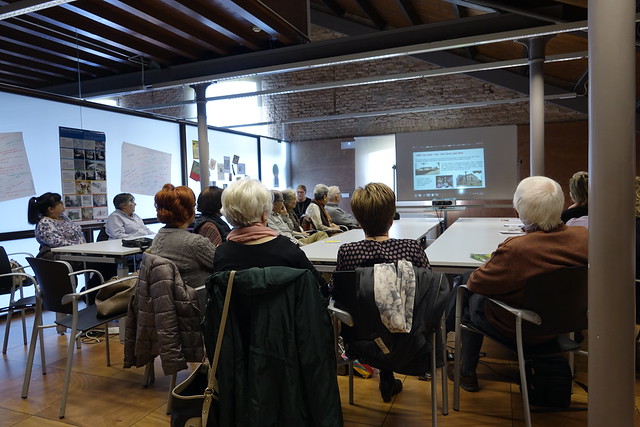 For the writing of the information, senior citizens have worked with Google Drive and for the subsequent edition of the video they have played tools such as Power Point, Windows Movie Maker or Audacity.

The presentation was led by Dolors Solano, the head of SeniorLab, who, after accompanying the process of drafting the project, wanted to value the work done by the five members of the group. The realization of the video meant 1 year of effort and enthusiasm for the authors who, in the act, wanted to emphasize the work and the history behind each slide of the work.

Neus Sevilla, one of the members of the group, assured in the introductory speech that a relationship of friendship between the participants has been consolidated thanks to the project SeniorLab.

With the completion of work like this, seniors demonstrate that people over 50 years of age have the capacity for innovation, the desire to learn and continue growing without fear of the new technological tools.

Citilab has added 133 new citilabers during the month of September!

With the start of all…